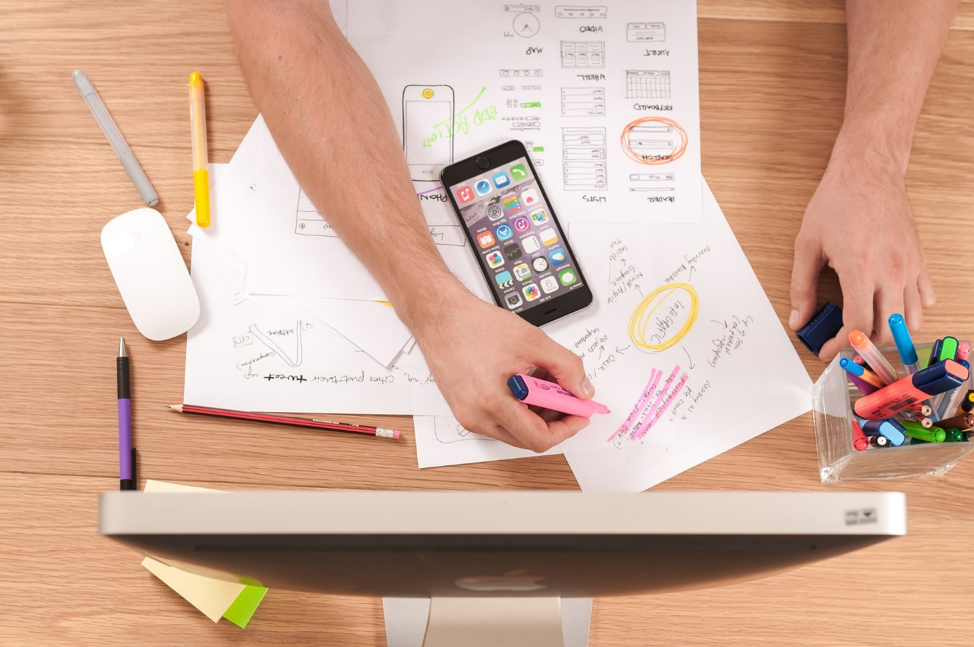 The mobile UI, or User Interface is a graphical and normally touch-sensitive mobile device display, like a smartphone or a tablet. The UI enables interaction of a user with the features, content, apps, and functions of a device. The requirements differ much from those of desktop computers.

A UX or User Experience software is effective in terms of crafting designs that are user-centered, which focus on requirements gathering and acting in behalf of end-users to build and boost the usability and usefulness of products.

Mobile app development services could make use of symbols and controls that could be hidden automatically until they’re accessed. Keep in mind that when it comes to mobiles, design could never be static. No two projects are the same, and so is the procedures that differ per product, size of the team, personal preferences, as well as other relative variables.

However, when it comes to software, there is a handful that every designer would love. With the continuous evolution of the mobile space, and the changing demands and needs of react native mobile app development services, hundreds of plug-ins, extensions, tools, and online resources have come and gone.

All have become necessary for the app design cycle. Among the hundreds however, there are several UI design tools that both UI and UX designers prefer.

The following are some tools that render your screens, workflows, and pitches sturdier with every project.

A cleaner and robust tool. It’s a software that’s easy-to-follow and code-free, allowing you to build or link interactive components and pages with a seamless drag-and-drop course of action. Powerful, with 3000 icons as well as 200 components resembling iOS, Android, and PC programs, it makes developers tasks easier.

Mockplus, in terms of simplicity and efficiency is the sure winner since it allows sharing and exporting prototypes on mobiles through simple export choices, without requiring remote publishing. Another highlight is the collaboration feature, which could propel a very time-efficient teamwork. The major new update in Mockplus 3 includes collaborative design, online review, group coordination, and other features.

The tool is lightweight, and based on MacOS. While Photoshop is a personal favorite among designers, there are still some that switch to the Sketch UI/UX design tool. The ultra-graphic design software has a similarity to Photoshop, but it’s however more aimed in UI/UX design. Sketch is a powerful software with a huge array of features, bringing out professional results.

It enables two times export, infinite zooming, as well as styled vector shapes apt for different resolutions. Moreover, it offers an ‘Export All’ feature and vector-based, thus there’s no issue in terms of exporting JPG, PDF, and PNG files.

Owing to its features and simple operation that could design common elements symbols, such as tabs, buttons, headers and others seamlessly, Sketch easily could become a tool that designers love. It doesn’t only fire up wire-framing, it enables easy hand-off to visual designers as well. As we employ the same software in the visual design phase, there’s not much problem in wireframes update into high-fidelity visuals.

A web software that possesses intensive prototyping and wire-framing. The built-in features and seamless features let you perform design assimilation and build prototypes and wireframes that are extremely interactive. With the drag and drop Photoshop and Sketch synchronization, the software systematizes workflow, keeping intact all the design layers.

Usability testing is present as well in executing design decisions that could help count users and their clicks, do tasks and display the results to the development team. The tool adds design, testing, and rollout stages efficiency. It has a dynamic software it consisting of different design patterns and elements for crafting dazzling designs from scratch.

UI libraries are wonderful resources with some features that are ready-made, like bootstrap elements for instance. UXPin’s drag-and-drop interface allows you to create prototypes and wireframes compatible with devices with an array of screen resolutions and sizes. The other powerful components include joint editing in real-time, a commenting system that’s intuitive, and previews that are easy-to-share.

The SmartGuides is a picturesque add-on in which you could measure the exact distance between elements. Editing all images within the tool is possible. Such as for instance you could change sharpness, contrast, brightness, and transparency seamlessly.

Zeplin, a useful platform because designers do not have to wait until the end of the designing process to hand over to developers the specifications. Developers could be introduced earlier on to the process. Moreover, iterations could be done as per project requirement.

The POP, or Prototyping On Paper App by Marvel is useful. The best application for prototyping mobile apps, making the move from paper towards digital prototyping pretty straightforward. All it takes is to take sketches pictures, upload them to the POP tool or you could simply upload the .psd files to the Adobe Creative Cloud.

Afterwards you could shift between gestures, vies, and interactions in a smooth manner. Since the tool is Dropbox-integrated, therefore there won’t be any trouble sharing with others. What sets the app different is that it starts with sketches of images that are hand-drawn, and connects them into your mobile device.

The app doesn’t create visual constraint as the prototype drawn is compatible with any device.

A wire-framing software meant for you as a developer. As a zero coding platform for websites and apps wire-framing, the software consists all of the documentation software required to pass choices of design, as well as layouts documentation. You could choose either the Standard or the Pro edition with extra documentation and collaboration elements.

Truly, it’s the biggest app concocted for advanced solutions in prototyping. The tool’s best characteristic is the speed since you could form prototypes of responsive mobile apps and sites quickly. The addition of interactions is seamless, and building Master pages as well as choosing patterns and elements that are ready-made from the Widget libraries.

You can also import images, add gradients, colors, and maneuver each object’s transparency as well. Version 9 of the tools provides support for an outstanding framework that possesses one-of-a-kind events, string functions, fonts, as well as convertible prototypes.

The tool builds prototypes that are extremely engaging, that has a similar appearance and feel to the mobile application you are making. The software furthermore could be used in testing prototype designs on numerous devices. Another grabbing feature of the tool is there are actions added to the app efficiency.

Several captivating features are Adaptive UI libraries, Dropbox sync, offline mode, a material design UI library and more. Here, you could have fast transitions on a screen, make changes in the orientation or touch gestures, as well as test every kind of prototype on any device to suit the entire purpose.

The tool converts transforms raw paper sketches to engaging, tappable prototypes, which enable you to demonstrate ideas for an app and gather feedback from others as well. With .PSD files, it works perfectly, without requiring you to convert designs before uploading. The tool moreover saves the time to do testing on performing changes since it will update automatically on the background.

A web browser could successfully test a prototype much in the natural milieu by device replication. Leading towards the most realistic experience in prototyping, is also provides custom animations benefits, as well as fading between screens. An interactive software, Marvel enables importing from Sketch, craft animations, build an app, and perform interaction prototypes, transitions and forward prototypes further with developers and stakeholders.

It’s a convenient way of opening up an entire customer workflow without issues from the static user flows. It’s not necessary for designers to be armed with advanced programs, such as After Effects and Framer to include transitions, animations, as well as other interesting features in the layouts of an app.

A superb prototyping software, it enables quicker and better prototyping for mobile and web apps. Built in 2008, the tool’s best feature is that it could be downloaded not just to a browser, but to a computer as well, providing a working offline option. You are not only able to design self-explanatory wireframes; you could also get feedback on the same right away.

JustInMind, as a dynamic software for prototyping comes with a superior widget library, letting you enter videos, HTML, docs, online widgets, online/offline content, and interactive maps on your app or website. The app does wonders for everything you want to build, from websites to advanced administration.

A sturdy wireframe UX prototyping software that provides prototype control to any kind of mobile app that requires a specific UI. HotGloo, developed with interactive features that are extraordinary, it enables more than one designer to collaborate on a one application wire-framing project.

You could work anytime on your wire-framing project, anytime, without barrier in accessing an operating system or browser.

The mobile UI/UX design tools help churn out easy-to-understand and systematic mockup/wireframe to your app so you could deliver gratifying results.